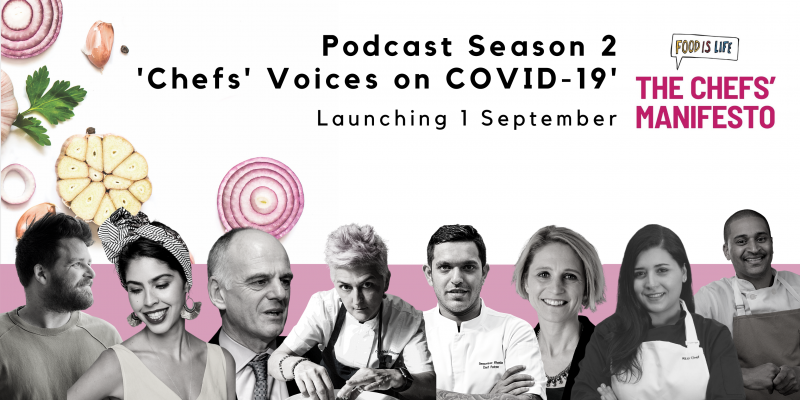 On September 1, we launched the 2nd Season of the Chefs' Manifesto Podcast with Chefs' Voices on COVID-19. In four consecutive episodes, chefs and experts from across the world discuss with Host Chef Tom Hunt how food production has been affected by the pandemic, what inequalities have been exposed and what the future holds: how chefs can stay strong and build back better?

The Chefs’ Manifesto Podcast is a resource for chefs to share stories of action on sustainable development tied to the UN SDGs through the Chefs' Manifesto community.

The first series, which was launched in March featured a total of 9 episodes, each covering one of the 8 thematic areas of the Chefs' Manifesto. Check out the first season here.

Find below the profiles of our guests. 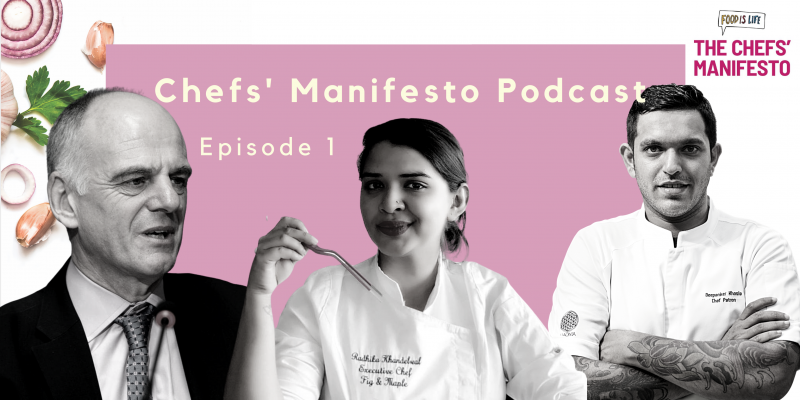 Summary: Episode 1 is an overview of how COVID-19 has impacted the restaurant industry, chefs and restaurants across the world. While Chef DK talks about how he turned his restaurant Haoma in Bangkok into a temporary kitchen to provide over 45,000 meals to those in need, Chef Radhika addresses how to find independent solutions to food insecurity without government support. Dr. David Nabarro, WHO Special Envoy for COVID-19 preparedness & response gives his advice based on his extensive experience in public health on all levels.

Chef DK is one of Bangkok’s most renowned young executive chefs – after quitting his job in Bangkok, he set up a roving food truck, and spent time on surrounding farms with a growing vision to transform the entire farm to the restaurant process. Today, he is co-owner of ‘Haomo Bangkok’, Asia’s first urban farm restaurant, with fruit and veg grown in Aquaponics, Hydroponics and soil. The core focus is on sustainability and giving back by educating people on health and the environment. In April 2020, Khosla launched the #NoOneHungry campaign to feed the jobless and hungry in Bangkok, channelling his passion for sustainability.

Chef Radhika has steadily carved a formidable and firm foundation for herself in the zero-waste and biodiversity movements through her restaurants Ivy & Bean and Fig & Maple in New Delhi, India. Her kitchen is well-known for playing host to indigenous Indian ingredients like Black chakhao rice, bok phool from West Bengal or lotus stems. Passionate for a secure food future and for local, sustainable and seasonal cooking, Khandelwal ensures food is prepared with a zero-waste approach by focusing on root-to-shoot cooking. As an advocate of sustainability and a member of the Chefs’ Manifesto, Khandelwal in early 2020 launched a 45-day long campaign titled “Be a #ZeroWasteHero”, raising awareness of issues such as hunger, biodiversity and food waste.

David Nabarro joined the UN system in 1999, leading the Roll Back Malaria initiative at the WHO. Between 2005 and 2014 he served as the UN System’s Senior Coordinator for Avian and Pandemic Influenza. Since 2009 he has been the Special Representative of the UN Secretary-General for Food Security and Nutrition, a position he continues to hold. From 2011 to 2015 he served as Coordinator of the SUN Movement and, in 2014 and 2015 was Special Envoy of the UNSG on Ebola, providing strategic and policy direction for the international response. Since June 2018 David has curated the Food Systems Dialogues as a contribution to the transformation of food systems, involving more than 1700 leaders in 29 locations within the last 18 months. Most recently Dr Nabarro has been appointed Special Envoy of W.H.O. Director-General on COVID-19 for preparedness and response. 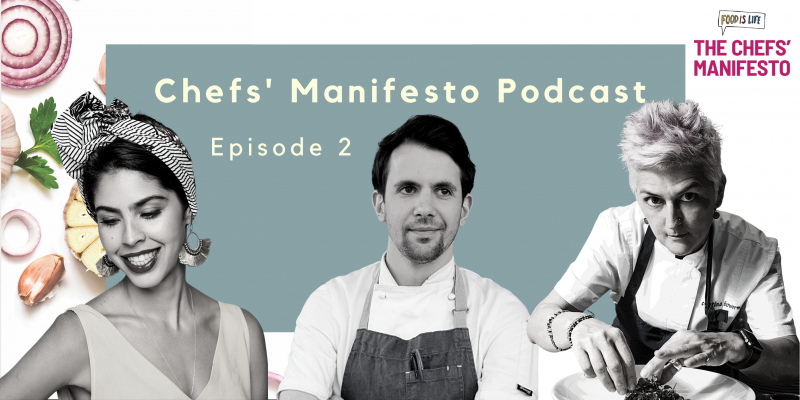 Summary: Episode 2 addresses the disruptions in supply chains and the challenges faced by actors in food production during COVID-19. Chef Cristina Bowerman and Bela Gil address the situations in their respective countries Italy and Brazil and discuss how chefs and the food system can adapt, including through stronger ties with farmers and consumers.

Born in Italy, Chef Cristina Bowerman, instead of hewing to merely traditional Italian dishes, found it more interesting to innovate her native cuisine. A visit to the US sparked this desire. After graduating with a law degree, she moved to San Fran­cis­co – the multitude of ethnicities in the city and their flavourful cuisines all served to inspire her to pursue a culinary career. Bowerman moved to Austin, Texas, where she attended Le Cordon Bleu and then worked at several restaurants, including the Driskill Grill. But the lure of home drew Bowerman back to Italy, where she first worked at Convivio Troiani and then opened Glass Hostaria in Rome. Her innovative take on regional Italian fare garnered her two forks from the Gambero Rosso guide and a Michelin star.

British Chef Merlin Labron-Johnon opened his first London restaurant Portland in 2015 aged 24. He is now the chef and owner of ‘Osip’, the farm-to-table restaurant situated in the heart of rural Somerset. He became the youngest British Michelin Star chef and was featured in the Forbes 30 Under 30 Europe 2019 ‘art and culture’. He cooks for the most vulnerable at ‘Refettorio Felix’ which provides a living room and dining room for the most vulnerable, advocating that a ‘meal is a gesture of inclusion’. Merlin is a founding member of the Chefs' Manifesto.

Brazilian Chef Bela Gil is exploring the impor­tance of healthy and conscious food through diverse projects. In 2006, she specialised in food and holistic nutrition through Ayurveda nutrition courses at the Ayur­veda Center of New York and healthy cooking by the New School, amongst others. Chef Bela has authored multiple cookbooks and received a series of awards. She supports diverse, social projects as part of “Bela Infancia” that teaches children in Brazil’s public and private schools to eat better and combat childhood obesity. Chef Bela is also an advisor of the Gastromotiva (an initiative of Chef David Hertz), Instituto Atá (founded by Chef Alex Atala among others) Slowfood, Greenpeace and FairTrade Brasil. 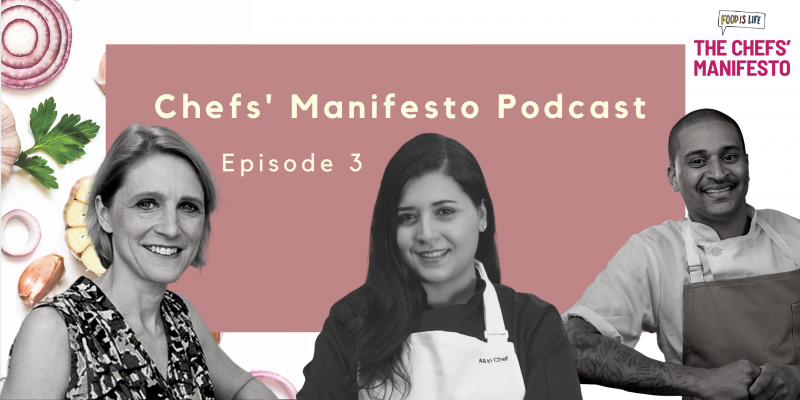 Summary: Episode 3 addresses the inequalities made visible in the food system throughout the pandemic and how restaurants and chefs have reacted and acted on this. Chef JJ Johnson and Chef Natalia Restrepo talk about the impacts of inequalities and inequities on black and indigenous communities and tell stories of how they are working to provide support to the most vulnerable. Prof. Corinna Hawkes explains opportunities of food system transformation and highlights the devastating impacts COVID-19 will have on food insecurity.

Chef JJ is a James Beard-nominated chef with two projects in New York: FieldTrip, a quick casual rice bowl shop featuring global-inspired flavours, which previewed at the US Open and opened its first location in Harlem in 2019; and Henry at Life Hotel, a full-service restaurant in NoMad that was recently named one of the Top Ten Best New Restaurants by The New York Times. Chef JJ is a part of Buzzfeed’s Tasty platform and he recently debuted a cooking show, Just Eats with Chef JJ, on TV One’s new network Cleo. Chef JJ's signature style of transforming simple cuisine with bold and unexpected ingredients was inspired by the Caribbean tastes he grew up with. Chef JJ published his first cookbook in spring 2018, “Between Harlem and Heaven” (Flatiron Books).

Chef Natalia is a professional cook with 15+ years experience. She is a culinary teacher and researcher of traditional and indigenous cuisine, as well as a food therapist based on ayurvedic and herbal medicine. Restrepo regularly delivers letures and workshops, such as on the challenge of food recovery in Columbia and the cook as a change agent. She is an ally and a supporter of the Food Banks of Columbia and volunteer of social gastronomy programs in Latin America. Apart from the Chefs’ Manifesto, Restrepo is a member of Slow Food and other initatives that promote activities aligned with the reduction of food waste and the expansion of environmental awareness linked to the food industry.

Professor Corinna Hawkes is Director of the Centre for Food Policy at City, University of London. Her work aims to support the design and delivery of policies and actions that effectively and equitably improve the quality of diets locally, nationally and internationally. Corinna serves as advisor on a variety of international initiatives. Amongst others, she was a Commissioner on the the Lancet Commission on Obesity and the EAT-Lancet Commission on Healthy Diets from Sustainable Food Systems. Corinna has worked for the WHO (Geneva), the International Food Policy Research Institute (DC) and in 2009-2010, held a fellowship at the School of Public Health at the University of Sao Paulo, Brazil. 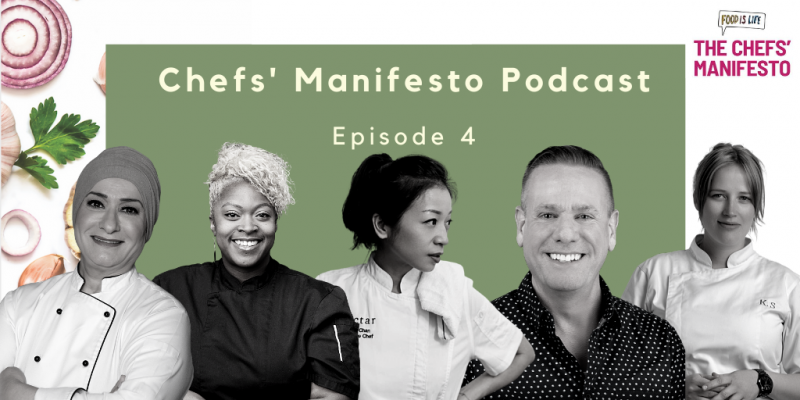 Summary: Episode 4 consists of a collage of chefs voices from across the world, looking ahead and reflecting on how the restaurant industry and chefs globally can work towards reopening and building back better.

Chef Kamilla was born in Copenhagen and developed her professional chef career at some of the most important kitchens of the world, such as the Mugaritz, Manoir Aux 'Quat Saisons, Paustian and Geist. In 2012, she moved to Bolivia to establish a culinary school and high-class restaurant called GUSTU, where she sought to share her experiences and knowledge of cooking with the aim to make even the smallest difference in the lives of young Bolivian people. In 2019, Chef Kamilla opened her restaurant Lola back in Copenhagen, a social awareness and globetrotting gastronomy project. Chef Kamilla strives daily to encourage gender equality in the kitchens and utilise gastronomy as a tool for social change.

Chef Manal Alalem is an Egyptian professional and TV Chef. Throughout her career, Manal has encouraged women’s involvement in the culinary industry by leading specialised culinary courses for women as well as setting up the Manal Club – a network of 6,000 women from across the Arab world who take part in culinary festivals, shows and competitions. Manal is a champion of Middle Eastern and Arab cuisine and regularly posts cooking videos of traditional dishes on her Youtube channel. Additionally, Manal has published several cookbooks such as Manal Alalem Kitchen and features in a number of newspapers and magazines. Manal also works as an ambassador for the World Food Programme.

Chef Suzanne's food philosophy is to create highly nutritious, flavourful and comforting food with ingredients that are accessible and all in an elevated way to make the ordinary, surprisingly extraordinary. Her culinary repertoire includes: Head Chef/Owner at True True Diner in Toronto, owner of Saturday Dinette; inaugural chef-in-residence at the Gladstone Hotel; a residency at Sand and Pearl Oyster Bar in Prince Edward County; starring role as one of the chefs in the acclaimed documentary film, The Heat: A Kitchen (R)evolution; and as a resident judge on Food Network Canada’s series, Wall of Chefs. Suzanne regularly advocates for food security, people of colour, mental wellness, equal pay for equal work, LGBTQ communities and nutrition literacy.. 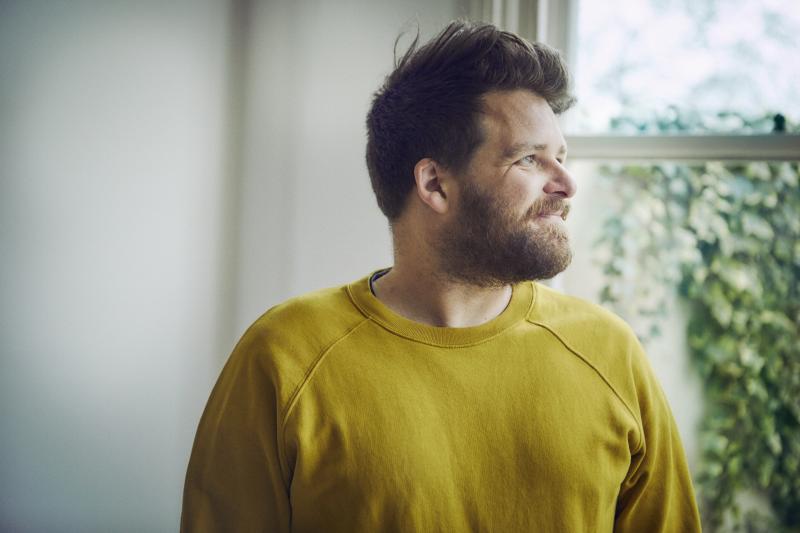 London-based Chef Tom Hunt is an award-winning chef, food writer, climate change activist and author of Eating for Pleasure, People & Planet. Tom prioritises people and the environment within his work and believes in a world with a fair global food system where our actions benefit other people and nature. He works to protect biodiversity and promote equality by raising awareness about the issues affecting our food system whilst empowering people and businesses to act responsibly through his consultancy, collaborations, food writing, presenting and events. In response to the global food waste scandal, Tom has developed a holistic approach to food called “Root to Fruit Eating” that educates and enables everyone from home cooks to industry chefs to tackle climate change through the food they cook and eat. Tom also works as a food and sustainability writer. He has a weekly food waste column in The Guardian and a column in Vegetarian Living, Foodism and Jellied Eel. Visit Chef Tom's website.