From 1 to 3 October, six chefs will travel to Kellogg's Headquarters for the Chefs' Manifesto Battle Creek event. Over the course of three days, conversations will look at how chefs and the food industry can drive action on plant diversity, nutrient density, food security and food waste for the Global Goals.

A number of these sessions will be live-streamed-- find the details below! 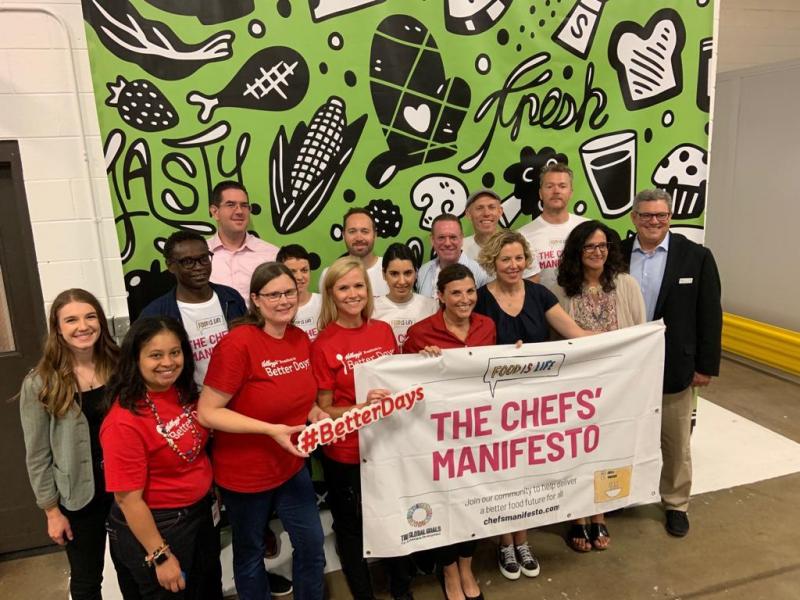 Anahita Dhondy is an Indian chef who received her training at India’s Hotel Management Aurangabad and Le Cordon Blue. Anahita is a well-known champion of her traditional Parsi food culture, the rich cuisine of India’s Zoroastrian community. Additionally, Anahita works to promote lost recipes and ingredients, such as the traditional grain millet, in her cooking. On this theme, Dhondy was involved in Tasting India’s Eat Like Your Grandma campaign- a chef-led campaign that aims to popularize and reintroduce “forgotten foods” into India’s diet. At the age of 23, Anahita became the chef manager of SodaBottleOpenerWala restaurant that cooks the authentic Parsi dishes. Anahita aims to be a youth icon and an inspiration for aspiring female chefs in India and around the world. Although young, Anahita has received the “Young Chef” awards and Times Food Award.

Chef Arthur Potts Dawson has been cooking for over 30 years, starting his career as a chef in 1987 with a three year apprenticeship with the Roux brothers. Since then, he has worked at Kensington Place, as head chef at the River Café and alongside Hugh Fernley-Whittingstall and Pierre Khoffman. He restyled Petersham Nurseries kitchen, led the re-launch of Cecconi's restaurant for the Soho House group, and worked as executive head chef for Jamie Oliver's Fifteen Restaurant and Piccadilly Diner. His two restaurants Acorn House and Water House have won numerous awards for their excellent food and sustainable practices such as rooftop gardens, low-energy refrigerators and wormeries, proving the profitability of an eco-friendly approach. Additionally, Arthur founded The People’s Supermarket, a supermarket that connects the urban community with the local farming community by stocking high quality and environmentally friendly produce from trusted, local suppliers.  As such, The People’s Supermarket is challenging the food industry to achieve a more sustainable and food secure future.

As an advocate for sustainable food production, Arthur often speaks on issues relating to global hunger and food waste in his role supporting the UN World Food Programme. Arthur has also worked on shows for the BBC Radio 4 food programme and writes for the Guardian’s food and travel section. Alongside all of this, Arthur consults on large scale sustainable food innovation with Ikea Food, The Fazer Group and Unilever.

Elaine McCarthy was born and raised in Ireland, and began working in restaurant kitchens at an early age in West Cork and Aran Islands of the coast of Galway. After completing studies in Professional Culinary Arts, Elaine secured positions both as a chefs and as restaurant manager for a variety of establishments including Michelin-starred restaurants as well as 5 star hotels.

Elaine’s holistic experience in both front and back of house operations and experience across Ireland, UK, America and France inspired her to set up her own restaurant and wine bar back in Ireland that she ran for 8 years.

After many years of successful business, Elaine’s passion for travel and culinary education saw her move to a prestigious Swiss Hospitality School where she ran the culinary programmes across two campuses. During this time, she also travelled extensively in Asia and South America and achieved a Master of Science degree in Culinary Innovation and Food Product Development.

With over three decades of experience and knowledge in the culinary arts combined with his love for serving the amazing people in his life, Mark take great pleasure in sharing his passion through his original recipes. Mark attended Columbia University in the City of New York, and is a graduate and former Fellow of the Culinary Institute of America. His career highlights include: Chef/Owner the Winking Sow, Managing Partner, Bois d’arc; Executive Chef for television and radio station NBC Chicago; Executive Chef at the Walnut Room in Marshall Field’s State Street, Chicago; Test Kitchen Chef, Good Eating section of the Chicago Tribune; Chef Instructor at Sur la Table, the Chopping Block, and Saucee & Savoree; Senior Corporate Chef at National Starch Food Innovation; Product Development Manager at Starbucks Coffee Company; featured speaker at the January 2009 conference, World of Healthy Flavors, at the Greystone campus of the Culinary Institute of America, in Napa, CA; Corporate Executive Chef at Basic American Foods; Executive Chef at New Seasons Market, and featured speaker at the 2014 Institute of Food Technologists (IFT) convention, featured speaker at Deli 1on1 Conference 2016. 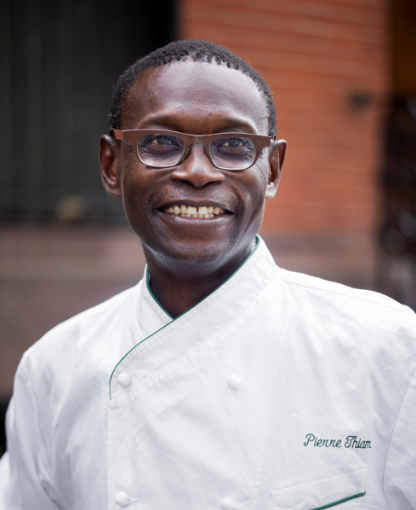 Born and raised in Dakar, Senegal, Thiam pays homage to traditional West African cuisine through his thoughtful approach to food.   He is currently the Co-Founder of Yolélé Foods, a purpose-driven African food company launched in 2017 that specializes in African superfoods.  Thiam is also the Executive Chef at the celebrated Nok by Alara in Lagos, Nigeria.  His pan-African fine dining menu brings an elevated experience of the African diaspora onto the table. Based in New York City, Pierre Thiam Catering introduces contemporary interpretations of ethnic flavors to a diverse, savvy clientele, including UN General Secretary Ban Ki Moon, among others.

He has authored two groundbreaking cookbooks; his first, Yolele! Recipes from the Heart of Senegal, was a nominated finalist of the IACP Julia Child Cookbook Award as well as a Special Jury Award Winner at The Gourmand World Cookbook in Paris. SENEGAL: Modern Senegalese Recipes from the Source to the Bowl was nominated James Beard Award for Best International Cookbook.

Thiam has been featured on numerous TV programs including Anthony Bourdain’s Parts Unknown, CNN's Inside Africa and the Food Network's Iron Chef.

His never-ending passion for African culinary traditions led him to organize AfroEats, the first African Food and Local Products Festival in Dakar in partnership with the Senegalese Ministry of Trade and Industry.

Today, he continues to share the culinary world of West Africa with a partnership with Boston University’s West African Research Association for Tastes of West Africa, an unforgettable culinary journey in Senegal. 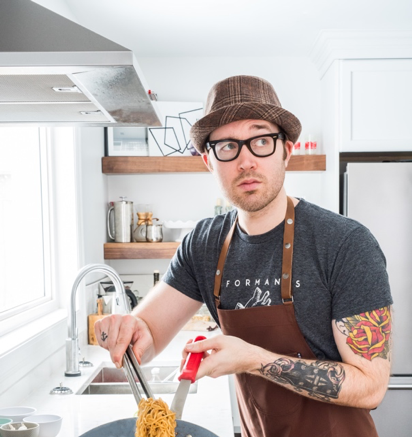 Dennis The Prescott is a chef, cookbook author, and food photographer based in Moncton, New Brunswick, Canada. Prescott has amassed a devoted following of almost 500K social media followers, cooks regularly on National television in the US and Canada, and has traveled the globe with World Vision Canada and WFP, cooking from New York to Nairobi. His National bestselling cookbook, “Eat Delicious” (William Morrow/HarperCollins) was named one of the Globe & Mail’s best cookbooks of 2017. For more, follow Dennis on twitter and Instagram.

Join the following live-streamed sessions. Please note some of these sessions will be on Zoom whilst others will be on Facebook:

The Power of Plant-Based Foods--

The Art of Telling the Story of Food Security--

Diversity and Inclusion in Food-- 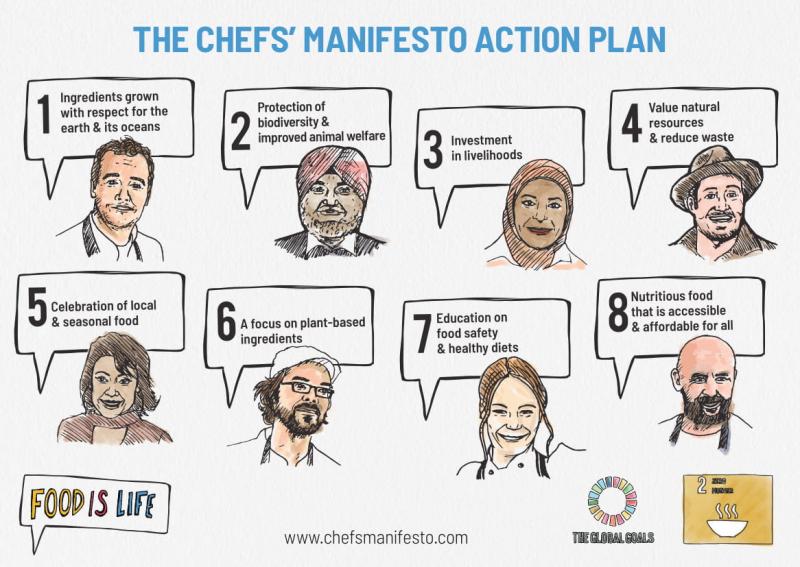