We live in unprecedented times. COVID-19 has disrupted our lives and presents us with extraordinary challenges. With this article, written by Okinawa-based Shojin cuisine Chef Toshio Tanahashi, we'd like to pause, reflect on our roots, and appreciate the importance of tradition and knowledge to move forward into the Decade of Action on the SDGs and accelerate progress on the Global Goals. Chef Toshio has joined the Chefs' Manifesto recently and sees multiple connections between the principles and values of ancient Japanese cuisine and our 8 Manifesto Areas!

The history of Shojin cuisine dates back to the 7th century.  With the introduction of Buddhism, it was born from the fact that eating meat was banned in courts. However, until today, the public struggles to understand its concept, and throughout the formation of the Japanese diet, the competition between plant- and meat-based cooking has consisted.

The History of Shojin Cuisine

The custom of eating meat – mainly obtained by hunting – was a strong tradition especially in areas where rice production was insufficient, such as in mountain villages and urban areas.  However, certain parts of the population were banned from eating meat. Gradually, food and cooking techniques developed, hygiene evolved and dishes made of vegetables and grains (Shojin dishes) were refined in Zen Buddhism and Shintoism. After the 13th century, during the period of dramatic cultural development (the Renaissance), Shojin cuisine was established by master Dogen as a food philosophy. The modern Japanese cuisine Washoku (which is recognised on the List of Intangible Cultural Heritage) was already developed at this time. In fact, if you look at menus and documents from that time, you will see that the style of Japanese food, its cooking methods, hospitality, ceremonies, tableware, etc. were exquisite and comparable to modern times. Most of those courses consisted of fish and vegetables, prepared with great technical skill. The food culture and daily life in the Edo period (1603–1868) before the Meiji era (1868–1912), when meat eating became common, was very similar to the sustainable lifestyle which is promoted today.

One reason why Japanese cuisine is globally recognised as clean and healthy is because its food culture has not relied on meat for many years. Fortunately, the spirit of Buddhism and Shintoism, which spread throughout the country as a spiritual base for the common people, helped raise awareness about our rich nature and its bountiful products. In other words, the spirit of Shojin and its food culture, cultivated by our climate and clean water, produced what today is known as Japan’s healthy and pure cuisine. Until food and dishes were imported into the country, many Japanese used to form their daily meals with rice, beans, seasonal vegetables, seaweed and sometimes seafood from nearby waters. The concept of hygiene, which was increasingly understood, enabled people to enjoy clean meals. Japanese  people have long valued and been accustomed to keeping their spaces clean, and having their food fresh.

However, our diet has changed dramatically through Western influence and eating meat has become more common than it has ever been.  Many people have taken to eating meat regularly – if not daily – and usually make meat or fish the center of their meal. Until World War II, meat was only consumed during festivals and ceremonies, such as on New Year's Day. In the postwar period and through Westernisation, the dining table changed, and bread, milk, meat and processed meats became commonplace. Dietitians trained in Western-trained diets influenced important food choices such as school meals, hospital meals, and company cafeterias, which meant that menus were increasingly based on Western standards and concepts of nutrition.

The traditional Japanese nutritional science was increasingly forgotten, and the Westernisation of food was promoted as part of the national economic and health strategy. As a result, from a health perspective, diseases such as cancer, diabetes and heart and brain conditions, increased sharply and are still on the rise. Interestingly, after the Vietnam War, the US government at the time began to tackle the issue of rapidly increasing numbers of people with diabetes and obesity through a report, which concludes that the ideal diet is that of the middle and late Edo era. Japanese food, with the contributions of Shojin cuisine, was labeled healthy and has become world-famous! 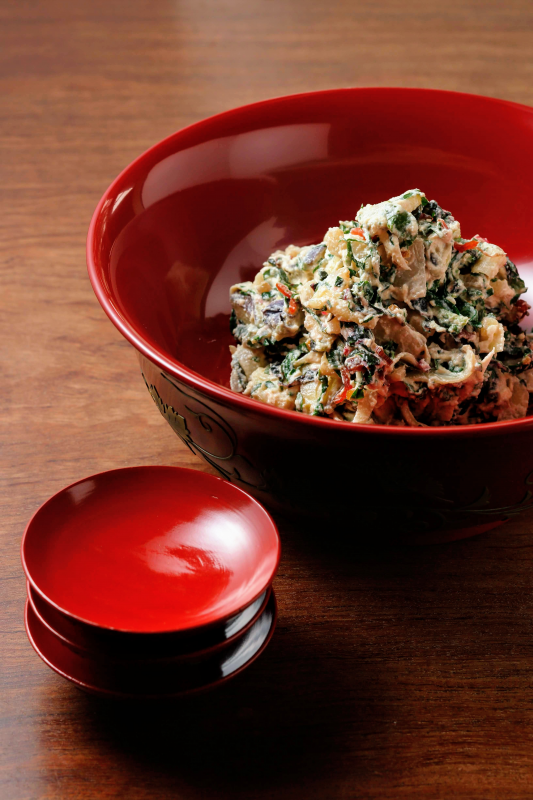 Unfortunately, the sad reality is that few people in Japan today value Shojin cuisine and especially young people have forgotten about this food tradition. What a sad reality! It would be dangerous to only think of food from a commercial point of view or as a necessity. Far from it, food traditions carry great wisdom from our ancestors and are part of our cultures.

The Invisible Message of COVID-19

Today, in the midst of the COVID-19 pandemic, we humans are losing lives and jobs on an unprecedented scale and the world’s economy and culture have been put on hold. We are all confined in our houses, small prisons, surviving without doing much. I, like many others, am hurt and stressed.  I am crushed by the anxiety of this tunnel without a clear exit. During this time, we realise the limits of humanity’s influence. But now can be the time for self-discipline. Both the nation and the individual wanted high economic development and believed that it would make them happy.  However, the appearance of this invisible virus stopped the world in just an instant. What does this mean? COVID-19 may have appeared as an envoy, delivering a clearer and more effective message than has ever been delivered before.

What should we all do now?  Listen to this invisible messenger and ACT!

2) Switch to a healthy diet centered on grains and beans. Eat plant-based!

3) Quit eating with desire and wasting money.  According to Buddha, the three poisons are greed, anger and ignorance.

4) Rely as little as possible on major supply chains. Small is beautiful!

6) Increase self-sufficiency not only for food but also for clothing & housing. Live local (SHINDOFUJI)!

7) Create a nation centered around agriculture!

8) Do not rely on mass production but grow it yourself and support local producers!

9) Value what has been produced with bare hands!