War and conflict drive food insecurity by destroying agricultural land, farms and infrastructure, by crippling economic stability, and disrupting humanitarian access. Food insecurity can also be exacerbated by conflicting parties committing gross violations of international humanitarian law, including the use of starvation as a method of war. In turn, food insecurity and hunger can act as a trigger for violence and instability, and as a push-factor for migration and recruitment by terrorist groups. Interventions to improve food security and nutrition can contribute to maintaining peace.

On Tuesday 21 April, the United Nations Security Council addressed this crucial topic of the "Protection of civilians from conflict-induced hunger" during an open video conference meeting. The session was organised at the initiative of the Dominican Republic, this month's Security Council president, which has continuously sought to maintain Council follow-up and monitoring of the issue of food security in countries affected by conflict. It was the first meeting in which members' statements were webcast since the Council began working remotely due to the COVID-19 pandemic. In the beginning of the meeting, Director-General of the Food and Agriculture Organisation (FAO), Qu Dongyu, the Executive Director of the World Food Programme (WFP), David Beasley and the Secretary General of the Norwegian Refugee Council, Jan Egeland, briefed the Council. 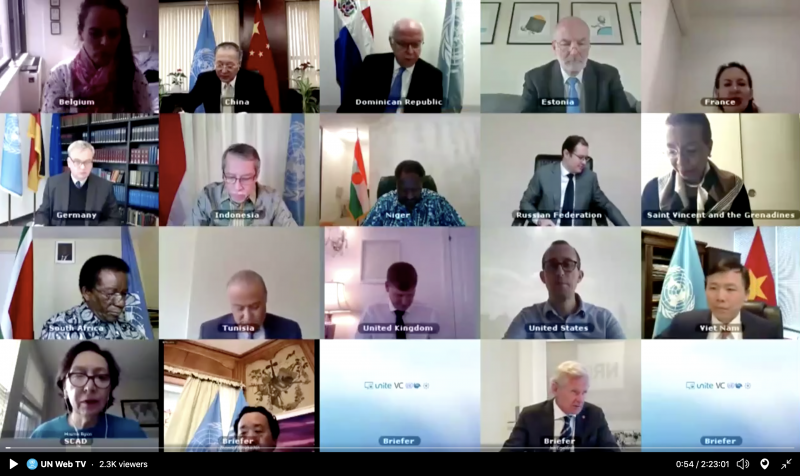 The Security Council has increased its engagement on the link between conflict and hunger in recent years, starting when the Secretary-General warned member states of the threat of four famines in Nigeria, Somalia, South Sudan and Yemen in 2017. Initially, the Security Council deplored the failure of certain parties in these conflicts to ensure access for deliveries of vital food assistance and other aid through a presidential statement in August 2017 and called on member states to provide resources and funding to avert famine.

On 24 May 2018, the Security Council then adopted resolution 2417 that “recalls the link between armed conflict and violence and conflict-induced food insecurity and the threat of famine”. Resolution 2417 strongly condemned the use of starvation of civilians as a method of warfare as well as the unlawful denial of humanitarian access. It urges all parties to protect civilian infrastructure critical to the delivery of aid and to ensure the proper functioning of food systems. It also requests the Secretary-General to report swiftly to the Council when there is a risk of conflict-induced famine and widespread food insecurity in the context of armed conflict and to brief every 12 months on the resolution’s implementation in connection with his annual briefing on the protection of civilians. 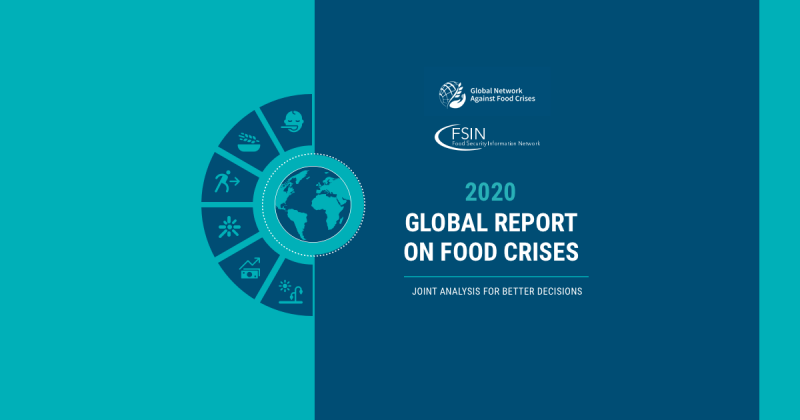 During their addresses, the briefers referred to The Global Report on Food Crises 2020 (GRFC), which was published on the same day by the Global Network Against Food Crises and the Food Security Information Network. The report found that 135 million people in 55 countries faced active food insecurity in 2019, data based on the Integrated Phase Classification (IPC) system used by the FAO, WFP and other partner organisations to monitor food insecurity. For children, a vulnerable population for which malnutrition has dire consequences, an estimated 75 million were found to be stunted while 17 million suffered from wasting in the 55 food-crisis countries. The report points to conflict/insecurity, climate change and economic shocks as the main drivers of rising hunger in 2019. Indeed, seven of last year’s ten worst food crises are on the Security Council’s agenda: Afghanistan, the Democratic Republic of the Congo, Haiti, South Sudan, Sudan, Syria, and Yemen. Forecasts for food crises in 2020 predict these three drivers will be joined by COVID-19 and desert locusts. Report authors note that the 55 food-crisis countries are likely to be highly vulnerable to COVID-19, as will countries that are net food importers, oil exporters and those dependent on tourism and remittances. 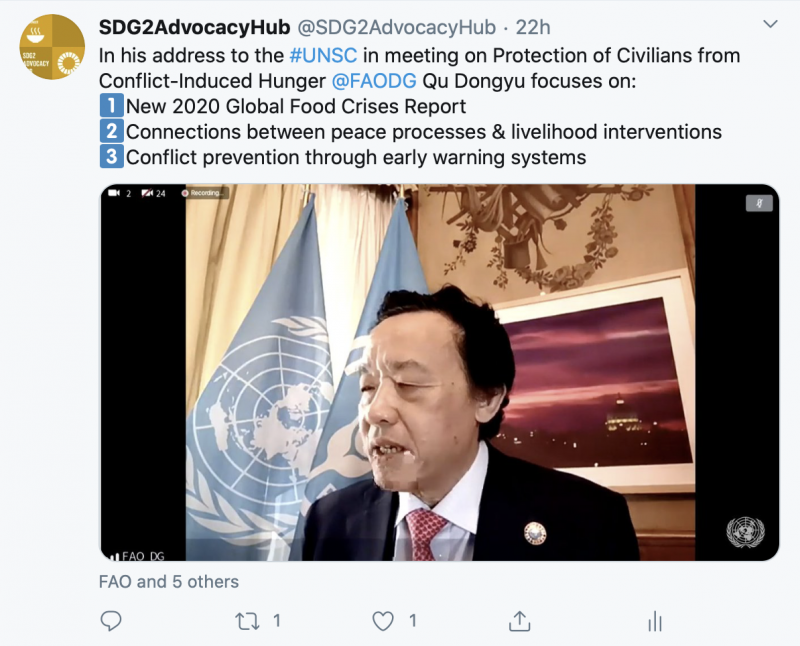 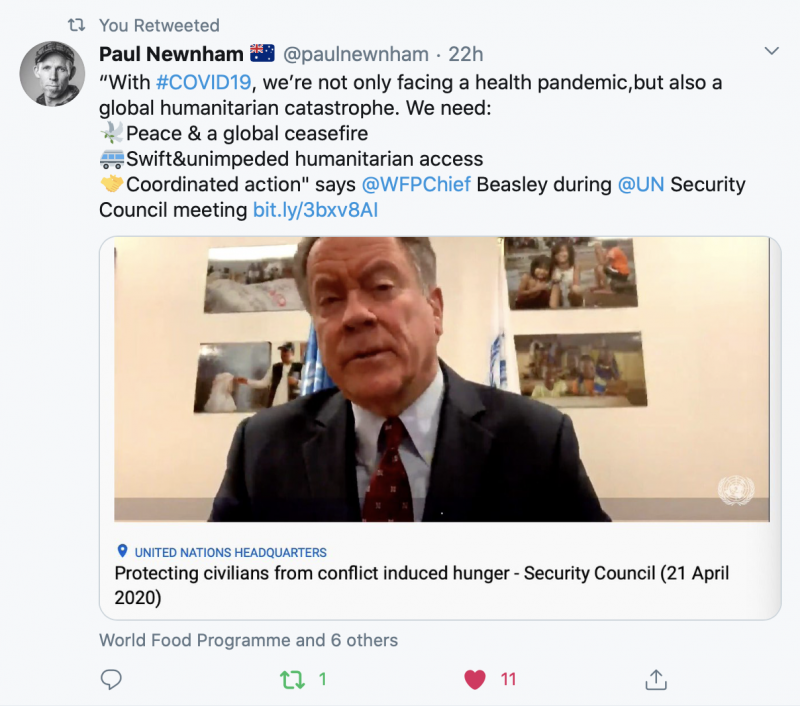 Qu Dongyu, Director-General FAO: Mr Dongyu underlined the impact of the COVID-19 pandemic on global food security and highlighted that the newly launched Global Report on Food Crises clearly demonstrates the links between conflict and food security. Mr. Dongyu also stressed the important connections between peace processes and livelihood interventions as well as the crucial role of early warning systems and prevention efforts.

David Beasley, Executive Director WFP: Mr Beasley highlighted that with COVID-19, the world is not only facing a health pandemic, but also a global humanitarian catastrophe. He then set out to outline three issues in need to be addressed in the current situation: 1) First and foremost, the world needs peace, Beasley emphasised and supported the UN Secretary-General in his call for a global ceasefire. 2) Secondly, global, swift and unimpeded humanitarian access to all vulnerable communities must be ensured. 3) Thirdly, there is a need for coordinated action between stakeholders including UN agencies and governments. Beasley mentioned a WFP analysis published last week which projects that economic and food security implications of the pandemic could especially affect African countries and the Middle East. He also drew attention to the high numbers of children and young people who are currently out of school and missing out on school meals. The ED emphasised the critical need to come together as a global humanitarian community to combat this pandemic and to protect conflict-driven countries from COVID-19. Beasley stressed that due to the COVID-19 pandemic, an additional 130 million people could be pushed to the brink of starvation by the end of 2020 and 300,000 people could starve to death every day if not reached by humanitarian aid.

Jan Egeland, Secretary General of NRC: Mr. Egeland stressed the urgency of the current global food security situation and called on the Security Council to help with field-based obstacles to reach people in need. He stressed that we are facing more, longer and crueler conflicts, which are mounting hunger and displacement, and that climate-induced disasters are exacerbating the hunger crisis. According to Mr. Egeland, instead of overlying on counter-terrorist responses, more should be done to address root-causes of conflict such as unemployment, gross poverty etc. He then presented 5 concrete asks of the Security Council: 1) Safe and unimpeded humanitarian access to everyone everywhere; 2) Stronger humanitarian diplomacy; 3) Strengthen the instrument of deconfliction; 4) Standard exemptions for humanitarian aid under counter-terrorism laws and sanction regimes; 5) Strengthened monitoring, reporting and accountability mechanisms.

Questions in the Concept note that briefers and members may wish to address:

Most Council members agreed that conflict remains a main driver of hunger and food insecurity and supported the Secretary-General’s call for a global ceasefire. Several mentioned landmark Resolution 2417 which acknowledged the clear and causal links between conflict, food insecurity and starvation and paved the way for action around conflict-induced hunger.

A number of member states urged conflict parties to guarantee unimpeded and swift humanitarian access and the uninterrupted supply of food and agricultural products. Against this backdrop, some suggested adopting targeted sanctions on individuals or entities that are destructing the delivery of materials to people in need. Most called on all parties to comply with international humanitarian and international criminal law and condemned the use of starvation as a method of war.

Women were highlighted as key actors contributing to food security during conflict. At the same time, women are often hardest hit and have fewer livelihood alternatives when crops are lost. Some countries pointed out that armed conflict, but also the current pandemic, disproportionately affects those already most vulnerable.

The locust infestations in Africa and Asia, which are threatening to increase global food security, were mentioned by a few member states. While most agreed that the Security Council should deal with the issue of peace and hunger, some stressed the Security Council’s primary responsibility of maintaining peace and security as well as the UN bodies' division of labour and expressed their opinion that the Council is not the right platform to address the issue at hand.

Several members underlined the importance of prevention and early warning systems and the need to increase food assistance and aid particularly in regions of conflict. One member state pointed to the dangerous long-term consequences of malnutrition undermining the prospect of development and sustainable peace.

The Dominican Republic circulated a draft presidential statement at the beginning of April, much of it based on resolution 2417 in apparent recognition that a product going much beyond the resolution would be difficult for some members to accept. Consensus has not yet been reached. Negotiations have proven difficult due to a divide between members that want to reaffirm resolution 2417 and advance the issue of conflict-induced hunger, including the effect of climate change on many food crises driven by conflict, and other members that do not deem the Security Council the right platform for dealing with the issue of conflict and hunger.